Tickets
£25 plus booking fee
£35 plus booking fee
VIP Tickets
VIP ticket holders will receive a signed paperback copy of Ronnie’s book ‘Framed’, and a commemorative printed picture of Ronnie presenting you the book that will be taken before the show.

Guests who purchase more than one ticket are guaranteed to be sat together. Select the number of tickets required and purchase securely online or order tickets by calling our ticket hotline on 07414 960956.

This event is all seated. All Tables seat 8 guests. Guests who purchase together will be automatically seated together.  Tickets can be bought in all denominations. All tickets will be emailed on the next Monday following purchase. To save booking fees or to request company invoices please call 07414960956 or email info@mjksportsevents.co.uk

Invoices available via sales@mjksportsevents.co.uk or by calling 07414 960956.

On May 26th Sporting Life Stories in association with Snooker Legends is proud to host A SPORTING LIFE STORY with the five-time World Champion RONNIE O’SULLIVAN.

The Rocket’ stands alone as one of sport’s true characters in an age criticised for its lack of sporting personalities and at this event we hear about it ALL. From the early days of century breaks at the age of 10, through the major wins and 147s, we will also see footage of some of the most magical moments ever witnessed on the green baize on our giant viewing screens.

After hosting this event three times before we could not pass up this unique opportunity to stage another exclusive night with the man himself at Peterborough’s Broadway theatre.

VIP ticket holders will receive a signed paperback copy of Ronnie’s book ‘Framed’, and a commemorative printed picture of Ronnie presenting you the book that will be taken before the show.

In addition following the in depth interview of his life story, in his own words, an audience Q and A means YOU will have to chance to ask The Rocket a question too. This is Ronnie O’Sullivan as relaxed and open as you will ever see him.

It was clear O’Sullivan was destined to be a superstar from the moment he picked up a cue. He was a prodigy, making his first century break aged 10 and his first maximum break aged 15. He turned 16 in 1992 and turned pro too.

His unique rapid playing style earned him the nickname “The Rocket” and he didn’t waste much time capturing his first title either. He won the 1993 UK Championship at the age of 17 years and 358 days, making him the youngest player ever to win a ranking title – a record he still holds. He is also the youngest player to have won the Masters, having won his first of many in 1995 at the age of 19 years and 69 days. Ronnie holds the record for the most competitive century breaks with a staggering 944. He also holds the record for the most ratified maximum breaks in professional competition (14) and for the three fastest competitive maximum breaks, the quickest of which was compiled in 5 minutes and 20 seconds which you will see on the night.

His record in Triple Crown events now stands at five World Championships, a record seven Masters and six UK Championship titles and on MayThe 26th as well as many other things you will hear all about those victories from the man himself.

This really is a story and an event not to be missed.

In addition to Ronnie as always at this event John Virgo will be our very special guest. John is interviewed on the night where he take’s us back to have a look at snooker behind the scenes and what it was like back in the days of the snooker halls. As always John will be a brilliant addition to the evening. 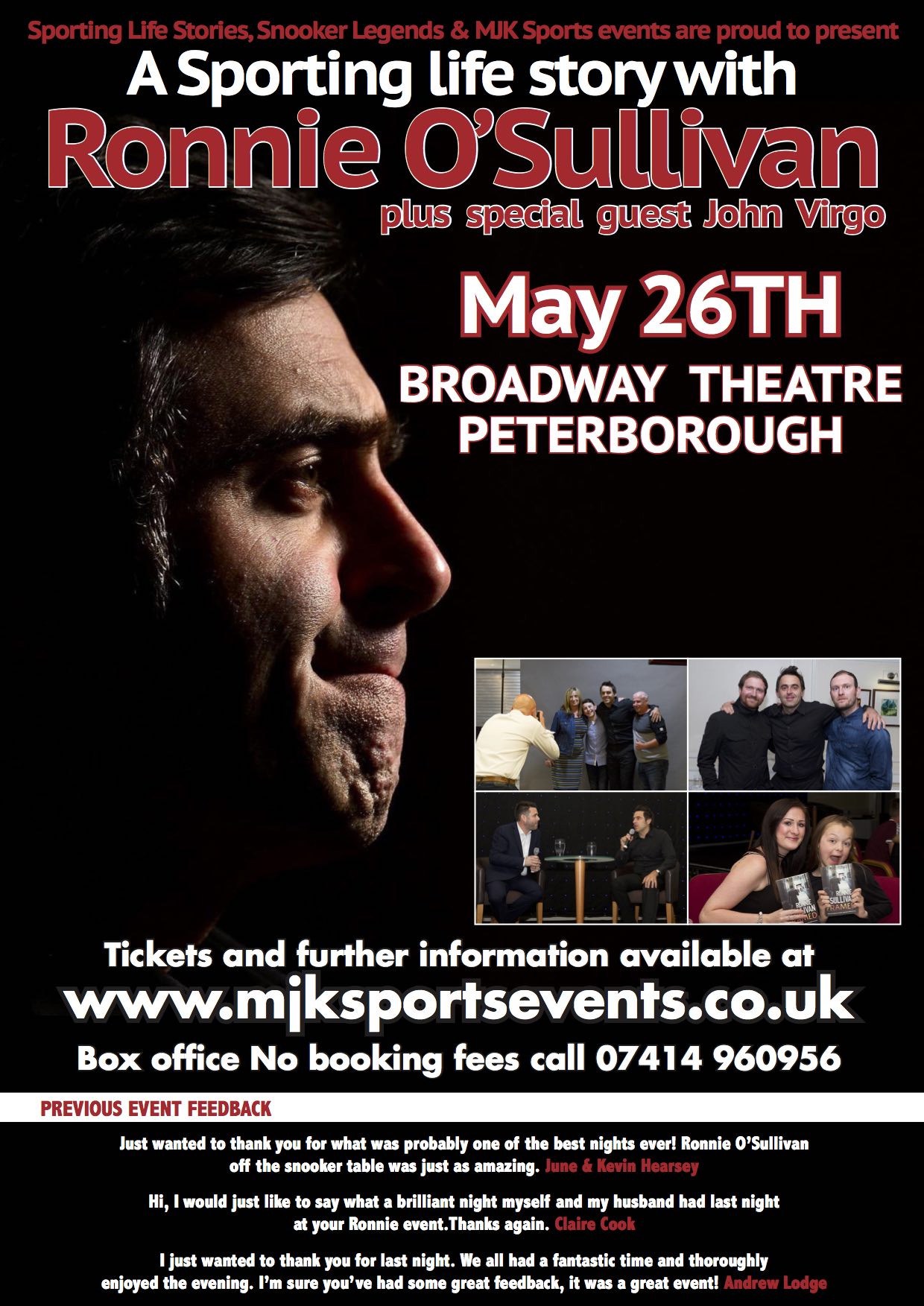